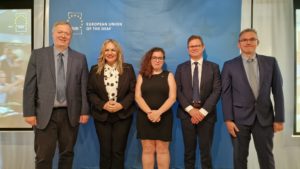 3 June 2022: The EDSO responded to the invitation of the European Union of the Deaf (EUD) and Secretary General Anton Petrič attended their General Assembly which together with a seminar and workshop took place from 26 to 28 May in Marseille (FRA).

At this event, Mr. Petrič presented the organization and operation of the EDSO. He provided information on EDSO’s assistance to the Ukrainian deaf football team with the help of UEFA funding so that it could take part in the Deaflympic Games in Caxias do Sul.

The EUD General Assembly has accepted Ukraine into their membership, which will allow it to connect more closely with EUD members and European Union countries.

The EDSO sincerely congratulates the newly elected EUD leadership and looks forward to working closely with them.